The next step in my equipment gathering, was to convert my pot and Cube and add valves. I bought a cooler valve kit and a standard valve kit from MoreBeer. They look identical, however they have a few minor differences. 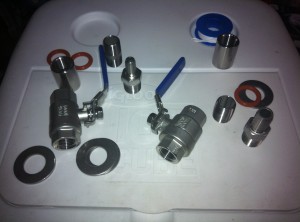 They were really easy to install, however it took me days of messing around and re-configuring to get both leak-free. It was a very frustrating process, especially since there wasn’t much documentation out there and some people say they had no problems from the start.

Here is what worked for me…

On the cooler (48qt Igloo Cube), I ended up using as-is, minus the outer washers. So basically valve, lock nut, o-ring, {cooler}, o-ring, washer, coupler. The key is to only hand tighten. On the pot, after I drilled my 7/8″ hold and filed it smooth, all I added was an o-ring. So basically, valve, o-ring, {pot}, o-ring, washer, coupler. Again, the key is to only hand tighten.

Note: on the pot, having the o-ring on the outside is not the best way, especially cause it can melt from your burners flame. I couldn’t get it to work any other way.

I removed and re-installed as described above, fille them both with water and actually let them sit for two days just to make sure it didn’t leak. They didn’t, whew!
I also added a wort chiller to my equipment. It’s 50′ of 1/2″ copper tubing, with brass hose connections on both ends. Brewing down to only 5 gallons in a 20″ wide pot, was a concern, however after setting it in the pot, I saw that nearly 3/4 of it would be covered at the end of a boil.