Now that I have a kegerator and plan to brew bigger batches than what Mr. Beer offers, I needed a keg. I spent hours researching kegs and trying to determine if I should buy new (at $100+) or used at ($50). The new ones are all stainless steel, shiny, no scratches or dents, and look very ‘purdy’. But, after long debate, I decided to get used and with most sellers they guarantee no leaks, however they don’t all clean or replace the o-rings.

On the day I received the keg, I took it out of the box and was actually very impressed with the condition it was in. One minor ding, several scratches and stickers, however it still looked good. 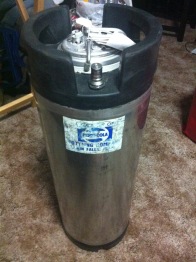 The funniest part of getting a used keg was that it still had diet Pepsi in it. With the family sitting around in the living room, I pull the release valve and POOF…diet Pepsi smell litterally filled house.

After sticker removal, wire brushing, and cleaning, the end result was an almost new looking, shiny ball lock cornelius keg. I replaced all the o-rings, except the poppet ones, which don’t come in the kits, but are sold separately. The basic reason for replacing is so that you don’t get any left over soda flavors in your beer.

I threw it in my kegerator to see how it fit, filled it with sanitizer and then just waited…I didn’t have any beer to put in it, darn it! 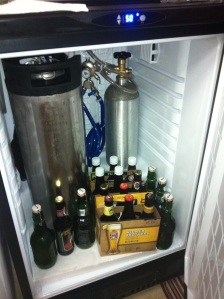