Time for another tasting… At this point I was out of Mr. Beer and finally got past the Ruination, so I decided to grab a few more. This time, ‘Tis the Season, I picked up some Octoberfest style and other seasonal beers.

Left Pic – From left to right: New Beldium’s Sommersault – I had tried their Belgo not too long before, on National IPA Day and liked it, so I thought I’d try their other styles; Sam Adams – because of popularity; Spaten (true German), Rumble – because I am obsessed with ‘smoked’ flavors and this was aged on oak chips (too piney tasting); Shock Top – I like their original and thought I’d try the October style; Widmer – I like Hef, so why not.

Right Pic – From left to right: Deschutes Mirror Pond – I had tried their Black Butte and really like it – I think I’m steering towards a Porter/Stout preference; Levitation – everyone said this would be something I like…don’t hate me yet, but it was ‘ok’; Sweetgrass and 1554 – not bad. 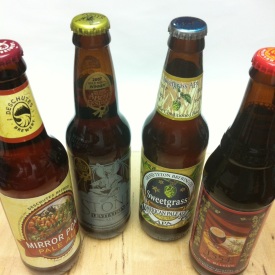 You may say, ‘what is he thinking’, but keep in mind, my tastes are changing daily and I’m liking more variety now that earlier in 2012.

Finally, next on my list was Black & Tan – I’ve always heard about it, but never new what it was or tried it. I was at World Market one day and saw this turtle thing, so I bought and it had all the varieties of mixtures as samples. 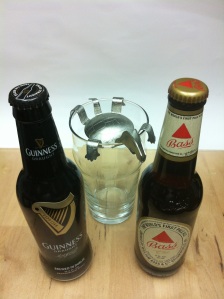 Essentially the turtle (or you can use a spoon), allows you to poor the Stout over the Pale ale and keep it separated. Let’s see how this works.

It was retty good, I like the combination, definitely the Guinness  however I think I would prefer a different Pale than Bass. I think though, that its more appealing to create than drink.