I was so glad when Brew Your Own Magazine announced their next Boot Camp was going to be held in San Diego, the ‘Craft Beer Capital of the World’. Being a Southern California native, it was right down the street…well closer than taking a flight anyways. I couldn’t pass it up. Two days of learning more about brewing beer from those that lead and contribute to the industry of brewing great beer – Mitch Steele, Chris White, John Palmer, Gordon Strong, Brad Smith, John Blichmann and many more. The biggest problem I had with the Boot Camp, was having to decide which sessions to attend, being that you could only attend 1 per day.

It just so happened I had a conference the days prior, for my current day job, that allowed me a nice full week to enjoy the area and a good deal of craft beer. 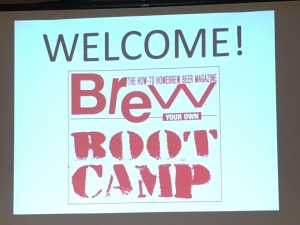 Arriving at the Boot Camp, decked out in my Deschutes Brewery shirt from a trip I had in 2016/17, which spelled it our so appropriately… Water, Yeast, Malt, Hops – Damn Tasty Beer. Greeted by the BYO Publisher Brad Ring and his fellow staff with a bag of swag. Usually your start out at a conference with a bag and a couple papers. With the Boot Camp, that bag was already on the heavy side with its brochures, hat, bottle opener, taster glass, grain (yes, grain), and more. 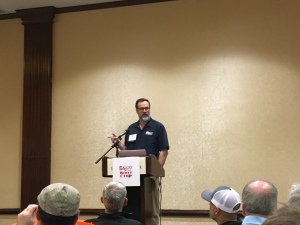 First off, I have to add, that going into this I wasn’t sure what to expect with the method or frame of mind of those leading the classes, nor my fellow home brewers and pro brewers in attendance. I would call them givers, because they were more than just teaching us, and they definitely weren’t ‘lecturing’ us; however, they were giving us their knowledge, their experiences, and their time… best of all, they enjoyed doing so. My point of view quickly changed about the fellow brewers as well. In the opening session, I had a few great conversations on brewing (thanks Steve at Quail Xing Brew House), and listened in a quite a few others. I realized my processes weren’t that rudimentary, nor was I alone in my quirks or issues. Above all that, I was able to contribute the knowledge I have gained from my mediocre repertoire of brewing, but do owe a lot of thanks to Mark (you taught me more than you could imagine).

The session I chose for Day 1 was Advanced All-Grain Techniques with Gordon Strong, a BYO Columnist, author, and President of the BJCP (beer judge certification program). The learning was mostly on different mashing techniques, from infusion to decoction and other ways to control your all-grain wort production. One of the greatest take aways from Gordon, however cliche it may sound, is ‘be you’. Don’t let others direct you on how to brew, but take their input and the input from other sources, and turn that into your own process. Learn the ingredients, learn the steps and why you are doing those steps. 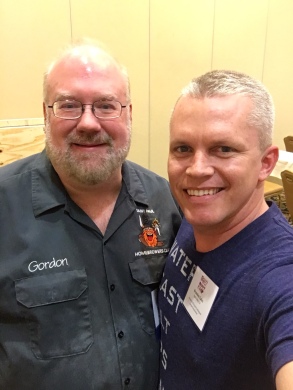 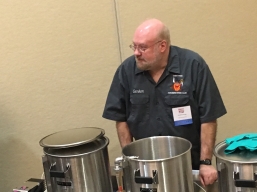 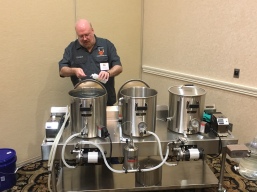 The morning continued with discussions about pH, hop techniques, and mash capping – the process of adding darker malts during vorlauf, which should lighten the harshness of those in the end result of the brew. As lunch came, we all joined in the main hall for a keynote by Peter Zien, Owner of Alesmith Brewing Co., and some very ‘fancy’ food, paired with bottles of Alesmith Speedway Stout. 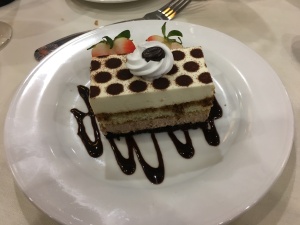 When you have a room full of home brewers, at least for me anyways, a good burger and beer go a long way.

The day of learning finished out we a lot more useful information that I will be taking back to the brewery and applying in my process. I look forward to seeing the results on my brews going forwared, especialy for C & D Citra IPA. We also had a surprise visit from John Blichmann, when the Blichmann Electric All Grain Brewing System we were using froze up on us. Ironically enough, it may or may not have been because the grains were crushed a little too fine by Blichmann himself, helping out Gordon. All-in-all the problems were quickly resoved, and might I say the system is amazing – just need to save a few bucks to get my own. 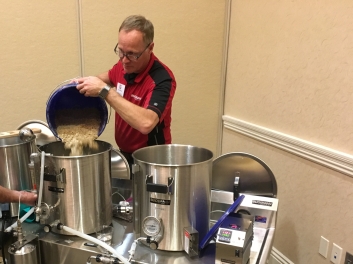 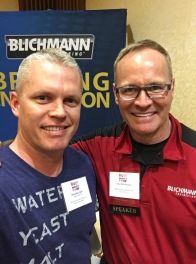 Here’s to tomorrow… Brew Your Own Boot Camp Day 2