Of the 6 hops varieties I purchase this year, only 3 really have survived – Cascade, Chinook and Northern Brewer.

I’ve never grown hops before, but I’ve done some simple gardening. There are a lot of resources available online and several books. I picked up ‘The Homebrewer’s Garden: How to Easily Grow, Prepare, and Use Your Own Hops‘ by Dennis and Joe Fisher (see it on Amazon).

I had to first build my Hop Trellis…

There are so many designs available on the internet and none really explained one that would fit my needs, so I went with 4 single posts, each 3 foot deep secured with cement. The posts are 4 x 6 x 12′, with 2 x 6 cross bars bolted through each post.

Hops also like sunlight and in my case, this allows for the hops to be facing the sun most of the day, while also being at an angle where the wind doesn’t hit them directly on. 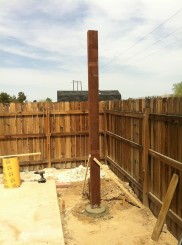 I prepared each hop hole by digging about 2 1/2 feet deep and wide, then mixed in a good amount of mulch. Hop growing resources tell you to make a mound and bury it just a few inches under the surface,  burying them where the sprouts are facing up.

Then I strung several lines of twine for each spot, up about 9′ to eye hooks I put in at the top.

Not too long from planting, I started seen sprouts come up, and to me they were grown fast at first… But then kind of halted about 1 foot out of the ground.

Sadly, only 3 of my hop varieties made it, the others, once I dug them up, were just rotting away. This could’ve been that I held onto them too long before planting. You want to plant them just after your regions Last Frost, and mine is at the end of April. Since the rhizomes came earlier on, I kept them in the fridge for a couple weeks to slow their growth/decay.

Then they started to take off, except my Northern Brewer, it was only about 6 inches tall. 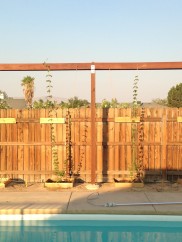 And now today, my hops are taking off. The Northern Brewer was still going slow, but once our heat wave was over, boom, it started shooting off.  Two of my hops’ bines shot all the way to the top, and rather quick for being a first year growth. The first photo of my hops below was shared by Deschutes Brewery – I messed up on my comment on their site, that’s actually my Chinook, which clearly shows in the photo. 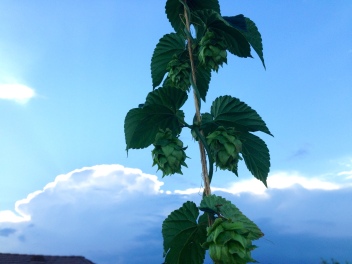 The hop cones where growing so fast, I was getting excited. 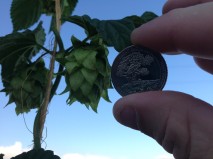 So what did I do, I cut one off. I just had to check to see how ripe it was getting. In the photos below, you can see all the lupulin forming – not quite far enough along to use. They still smelled like green plants, and didn’t taste good – yeah, I did!

Here’s looking up to a prosperous first year crop, be sure to check out future posts on my hops – I will be using them in a brew, even if only one survives….because I can!